Reevaluating the biogeographical history of living and fossil Fagales 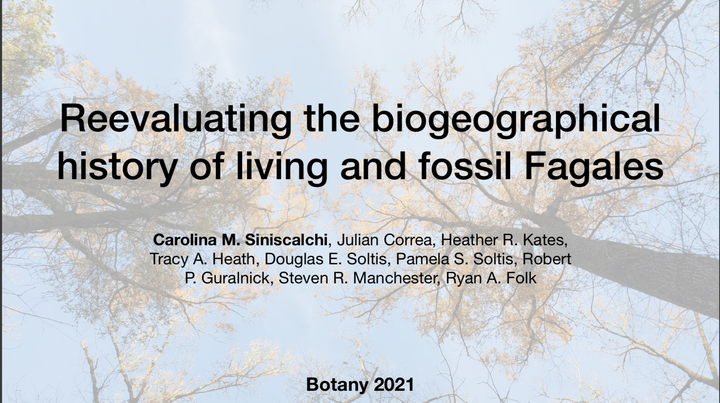 Plants from the order Fagales are iconic components of temperate forests worldwide. Due to their ecological and economic importance, the clade is relatively well studied, and different hypotheses regarding time of origin and biogeographical history of the group have been proposed. Fagales have an extensive fossil record, including many macrofossils. While fossils are frequently used as calibration points for dating phylogenies, few studies in plants have included them directly as terminals in phylogenetic analyses. Bayesian total-evidence methods using the fossilized birth-death (FBD) process jointly estimate the relationships and divergence times of living and fossil taxa, enabling more complete use of the available data and more appropriately accounting for uncertainty. Moreover, trees comprising both extant and fossil lineages can provide more complete information for downstream analyses investigating diversification dynamics or historical biogeography. We leveraged strong species and gene sampling of Fagales from the NitFix project with an expanded morphological matrix to reevaluate the Fagales fossil record in order to: (1) infer the phylogenetic relationships and the time of origin using the FBD model as implemented in RevBayes, (2) provide a framework for evaluating climatic and biogeographic history of Fagales, and (3) investigate how the inclusion of fossil records as tips influences ancestral reconstruction. A matrix with 105 morphological characters was assembled for 33 fossil taxa and 52 extant species, as well as five nuclear markers and literature-based stratigraphic range data. The DEC model implemented in BioGeoBEARS was used to reconstruct ancestral areas using both modern and fossil occurrences. Recovered phylogenetic relationships are conventional except for the position of Nothofagaceae, but the inferred ages are older than those from previous studies, with a mid-Cretaceous most recent common ancestor date for the order. The inclusion of fossils in the biogeographical analysis shows an origin consistent with a boreal temperate distribution corroborated by ancestral niche reconstructions but predating the Arcto-Tertiary flora hypothesis. Range contractions in the Cretaceous led to a primarily North American origin for most extant families. Removing fossil taxa from the tree portrays a different story, shifting the origin of all extant families to East Asia or a broad ancestral area including that region, reflecting the present distribution in this biodiversity “museum.” Such a strong difference in perspectives from extant-only analyses could imply a general bias towards low extinction areas, underlining the importance of “fossil-aware” biogeography where possible.