I’m a Post Doctoral Associate at Mississippi State University. My two main research lines are macroevolution of the nitrogen fixation symbiosis in flowering plants and systematics and evolution of the sunflower family.

Macroevolution of Nitrogen Fixation
Understanding the drivers of the nitrogen fixing symbiosis in flowering plants.
Follow

Biodiversity at the global scale: the synthesis continues

Traditionally, the generation and use of biodiversity data and their associated specimen objects have been primarily the purview of individuals and small research groups. While deposition of data and specimens in herbaria and other repositories has long been the norm, throughout most of their history, these resources have been accessible only to a small community of specialists. Through recent concerted efforts, primarily at the level of national and international governmental agencies over the last two decades, the pace of biodiversity data accumulation has accelerated, and a wider array of biodiversity scientists has gained access to this massive accumulation of resources, applying them to an ever-widening compass of research pursuits. We review how these new resources and increasing access to them are affecting the landscape of biodiversity research in plants today, focusing on new applications across evolution, ecology, and other fields that have been enabled specifically by the availability of these data and the global scope that was previously beyond the reach of individual investigators. We give an overview of recent advances organized along three lines: broad-scale analyses of distributional data and spatial information, phylogenetic research circumscribing large clades with comprehensive taxon sampling, and data sets derived from improved accessibility of biodiversity literature. We also review synergies between large data resources and more traditional data collection paradigms, describe shortfalls and how to overcome them, and reflect on the future of plant biodiversity analyses in light of increasing linkages between data types and scientists in our field.

Lineage‐specific vs. universal: A comparison of the Compositae1061 and Angiosperms353 enrichment panels in the sunflower family

Phylogenetic studies in the Compositae are challenging due to the sheer size of the family and the challenges they pose for molecular tools, ranging from the genomic impact of polyploid events to their very conserved plastid genomes. The search for better molecular tools for phylogenetic studies led to the development of the family-specific Compositae1061 probe set, as well as the universal Angiosperms353 probe set designed for all flowering plants. In this study, we evaluate the extent to which data generated using the family-specific kit and those obtained with the universal kit can be merged for downstream analyses. We used comparative methods to verify the presence of shared loci between probe sets. Using two sets of eight samples sequenced with Compositae1061 and Angiosperms353, we ran phylogenetic analyses with and without loci flagged as paralogs, a gene tree discordance analysis, and a complementary phylogenetic analysis mixing samples from both sample sets. Our results show that the Compositae1061 kit provides an average of 721 loci, with 9?46% of them presenting paralogs, while the Angiosperms353 set yields an average of 287 loci, which are less affected by paralogy. Analyses mixing samples from both sets showed that the presence of 30 shared loci in the probe sets allows the combination of data generated in different ways. Combining data generated using different probe sets opens up the possibility of collaborative efforts and shared data within the synantherological community.

First volume of Capitulum is out!
This summer The International Compositae Alliance (TICA) rebooted their newsletter, once known as Compositae Newsletter, now named Capitulum. The first volume is out and free to read at the TICA website (compositae.
Carolina M. Siniscalchi
Last updated on Aug 27, 2021 1 min read
Project 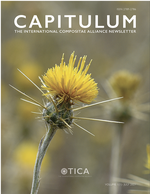 A mid-summer update
We had a summer full of lab work here. We completed hundreds of target capture preps for sequencing and received A LOT of new data to analyze. Yay! I also trained some of the undergrads in microbiome DNA extraction and PCRs, for one of our side projects.
Carolina M. Siniscalchi
Last updated on Jul 17, 2021 1 min read 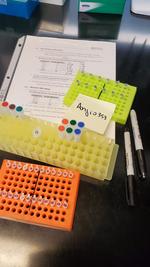 Reevaluating the biogeographical history of living and fossil Fagales
Plants from the order Fagales are iconic components of temperate forests worldwide. Due to their ecological and economic importance, …
Jul 22, 2021 2:30 PM
Project Video Follow